You are here: Home1 / Excerpt

When my surgeon called to tell me I was “done’ with breast cancer, she asked me if I would meet with another patient, a young mother, who wanted her story for her child. In case.

“In case?”I asked stupidly and then it hit. The mother might die.

Two days later my cell rang. The connection was weak, and at first a childlike voice vibrated through my Bluetooth. I pulled forward into the drive-through desperate for caffeine. “Cancer . . . stage four . . . I need to write,” she said. “Jen.” Her name was Jen. I scribbled it down along with a time and date on a Starbuck’s napkin. My surgeon had told her I could help her write her story.

We met at her place, a refurbished ranch-style home on the north side of Phoenix. The kind with green grass, willowy eucalyptus trees and a porch with those white Adirondack chairs you want to take a nap in, all just a block from the hub-bub of downtown. The almost bald, tinker-bell pixie met me at her door. Within minutes her voice, a silvery child-like song, charmed me as she heated green tea for us. In coming weeks I would learn the story she needed to tell, and I would begin to write pieces of it—and encourage her to write. But she had already embraced the idea in her own way.

Jen’s story opens with the birth of Quinn. By now Quinn is nonstop energy—and you have to wonder how the petite Jen ever breastfed this bundle of boy. “But I did,” she explained. “And I like to get A’s on everything I do.” She undertook breastfeeding as she undertakes life–with a “can do” attitude. But when Quinn was only three months old, something odd happened. One day as Jen nursed, she fingered a hard lump on her right breast. Intuitively she was troubled. She visited the doctor who had delivered Quinn, but he insisted it was nothing.

Jen ignored the lump, but within weeks the lump expanded, growing quickly to the size of a large, hard walnut. Finally she sought a second opinion from a doctor who said, “It is probably nothing—but if you want to check it out, I know a fine surgeon.” The woman who always got A’s wanted it checked.

As soon as possible Jen visited surgeon Linda Liu. After the examination, Dr. Liu arranged for Jen to undergo immediate imaging at another clinic. “They kept taking pictures, but I still didn’t get it,” explained Jen. “I thought they were going to find some weird cyst in there–with hair and teeth.” She paused and we laughed. The radiologist just kept snapping pictures and finally she turned abruptly and said, ‘This looks like cancer.” Jen froze.

Darkness was creeping across the sky by the time Jen left the cancer clinic and wearily navigated the miles home. “Quinn was only five months old, and I had been diagnosed with cancer. I could feel the fear just creeping up all over me.”

When Jen told her husband, he was equally stunned. Together they cried. Later that night, they began to do online research. “Chris is a scientist—and research is what he does,” explained Jen. “We discovered that breast cancer is very curable and that most young women survive it, and we kept saying—it’s not like it has spread everywhere.”

But it had spread. When the imaging came back, Jen learned that her cancer was stage four, the highest level. The scan showed the disease inside her lungs, spleen, outside her liver, and in her chest wall.

“At first I couldn’t even hear my diagnosis.” Jen looked down. “Most people interpret stage four—metastatic breast cancer– as a death sentence. But I couldn’t—I just couldn’t.

Initially it can be hard to talk or write about my cancer.  Jen admitted she was overwhelmed by phone calls and text messages from family and friends. “When my sister-in-law, who had worked in public relations, asked if I needed someone to help with my PR, I realized I did. How can you juggle the onslaught of messages, Facebook notes, calls and emails when you are immersed in figuring out how to save your life? And this is when I first realized that writing could help me,” she explained.

“I decided I would start a blog,” Jen added. “This would allow everyone the chance to keep updated on my illness without feeling they had to call me all of the time. And I didn’t want to just keep dumping my story out. I have wonderful friends and family but they are too busy to check on me every day.” And Jen had to manage her doctor appointments, her chemo, and surgeries while she continued to work fulltime as a lawyer. The writing allowed her to open up about her personal struggles while keeping others informed simultaneously.

“Computers do weird things when I enter a room. They turn on or off. I can’t explain it.” Jen joked about her lack of technology prowess, but she didn’t let this get in her way. She went online, did the research, and launched www.boobyandthebeast.com. “And it worked,” she explained. “Looking back, I realize I needed help on many levels, and I found the writing was completely cathartic. It gave me a powerful and needed release—and I got a tremendous response. People kept asking if they could share my blog, and this has inspired me to keep writing—to keep going.”

On her blog Jen does not sugar-coat her experiences. Instead she models how to write and even how to rewrite a painful life story. We can choose to succumb to or stand up to a chronic illness. And Jen is standing up. She has faced surgeries, radiation, chemo, insurance battles and reoccurrences. Sometimes she wavers and cries, but mostly she focuses on those she loves, goes to yoga, finds her positive voice—and steadies herself with her words.

The average life-span for a young woman with metastatic breast cancer is a little over two years after diagnosis. Recently Jen finished her memoir, The Fire Within, about living with cancer. She researches, educates, and manages a life with this horrible disease. She is four-and-one-half years out and going strong.

Until a few months ago, I visited recently with Jen every Monday at chemo.  She taught me that can seize our attitudes and find our words and be healed even as we face the possibility of dying. She is a complete inspiration. 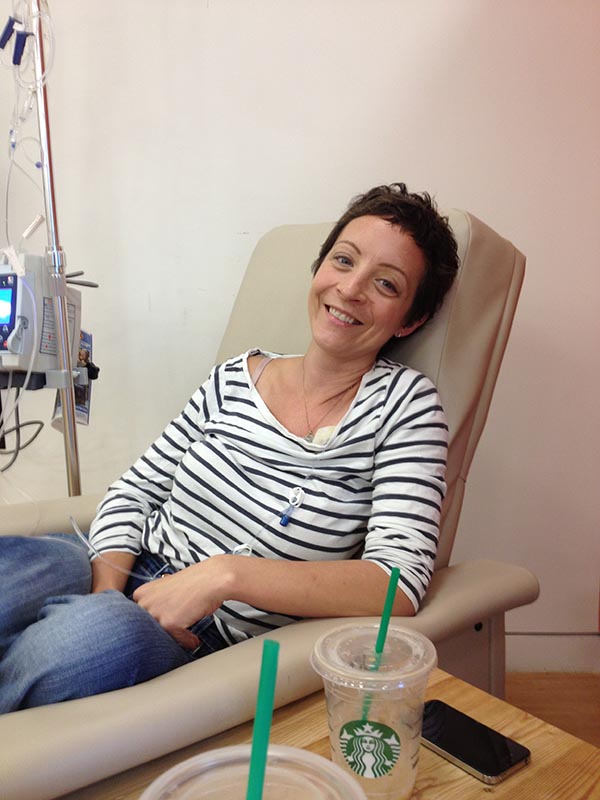