Living in the desert it is my morning ritual to begin each day with a large, bubble glass full of black iced tea. The bubble glasses were a long-ago wedding present, and since they are party glasses, it makes me joyful to drink my tea from them.

Five years ago, Steve had business in Japan. Usually, I don’t’ sign on to his trips, but this was pre-COVID, and he promised we would attend a tea ceremony. That snagged my interest.

After hours on a plane and a short train ride, we arrived in the futuristic glass train station of Kyoto. The train station proved to be a stark contrast to the tiny historic streets of Kyoto lined with old Buddhist temples and Shinto shrines as well as restaurants that make an art of ancient Japanese cuisine.

On our third day we visited the tea house on one of these cobblestoned streets. We waited outside in alternating drizzle and rain until the appointed time.  Then the door to the tea house slid open and a charming young woman in a pale green kimono dotted with red and white cherry blossoms peeked out at us. She pointed to a faucet near the door. “Please wash hands,” she said in a childlike singsong. Following her direction, we left our shoes outside the house, and ducked to enter a new world of tea.

Wordlessly, the girl ushered us into the tearoom with a huge cast iron pot in the center. Steve sat at the head of the mat with me by his side across from our host. We were taught to kneel, sitting on our legs, and to bow toward each other in a gesture of greeting.  An older woman dressed in a dark formal kimono appeared from behind a silk-sheeted door and bustled into the room, placing candies wrapped in white papers in front of us.

We shared our names. Stephen. Sandra. Then the girl pointed to the older woman, “Mother,” she explained. We nodded in deference. Then the girl placed her palm on her own chest and said, “Hana.” She spoke it like a song.

I tried to nibble at the candy which tasted like iced sugar cubes. “Do we have to eat it?” Steve whispered. I nodded at him. Then I tried to smile as the sugar cube caught in my throat and made me choke. I had swallowed it almost whole. The older woman’s face froze as if I had violated the official tea protocol.

Steve tried to cover for me declaring, “Good. Very good.” And the poor man who hates sweets was rewarded with a second candy that he munched with inauthentic joy. Peace was restored in the tearoom.

The mother had slipped behind the silk-sheeted door and returned with a tray containing small cups, tea bowls, and a whisk. She placed them in front of Hana who ceremoniously wiped them and began to mix and mash the tea.  “Matcha.  Green tea.  It is like gold. Expensive.” The words lit up her face.

Then she passed the tea to her mother for approval. Carefully the mother examined the tea, sniffed it, and then formally nodded.

“Now you must approve the tea,” Hana explained to us. Then the mother lifted the teacup and while I could not detect exactly what happened, it appeared in passing the teacup to Steve it got caught in the sleeve of her kimono and flipped over. The precious matcha powder lay scattered across the mat. The women’s faces took on the haze of the dark clouds outside, and I thought the mother might cry.

“It’s okay,” I said catching the mother’s eye. But her humiliation was painted across her face as she lowered her head and swept up the tea.

“It’s okay,” Steve repeated. But their silence clouded the room.

I wanted to tell them stories of my many goof-ups. How I fell off a pommel horse in fourth grade PE and landed on my head with my neon red dress tossed over my head and my cotton underwear on full display for my classmates. Or about last year when I turned around during the celebration of my son and ran directly into a huge and ornate birthday cake. Not only did I disfigure the cake, but my white blouse also looked like a Pollack painting smeared with buttercream icing and chocolate.

While I wanted to break the tension with my stories, I sensed this was not the place. A deep-seated awkwardness hung in the air as Hana mixed the new tea. Then her mother passed the cup to Steve. He sipped it and nodded with genuine pleasure. Then the women turned their gaze to me as I was handed my cup. I drank it slowly. Carefully. The tea smelled like the fresh grass in May, but it tasted like bitter greens followed with a kick of licorice. I willed myself to like it.

“Wonderful!” I exclaimed as I lowered my cup. “Good! Very good!”  The mother sighed with relief and Hana’s smile returned. It was a dark, rain spattered day but suddenly it felt like a ray of sun had cut a path into the room. 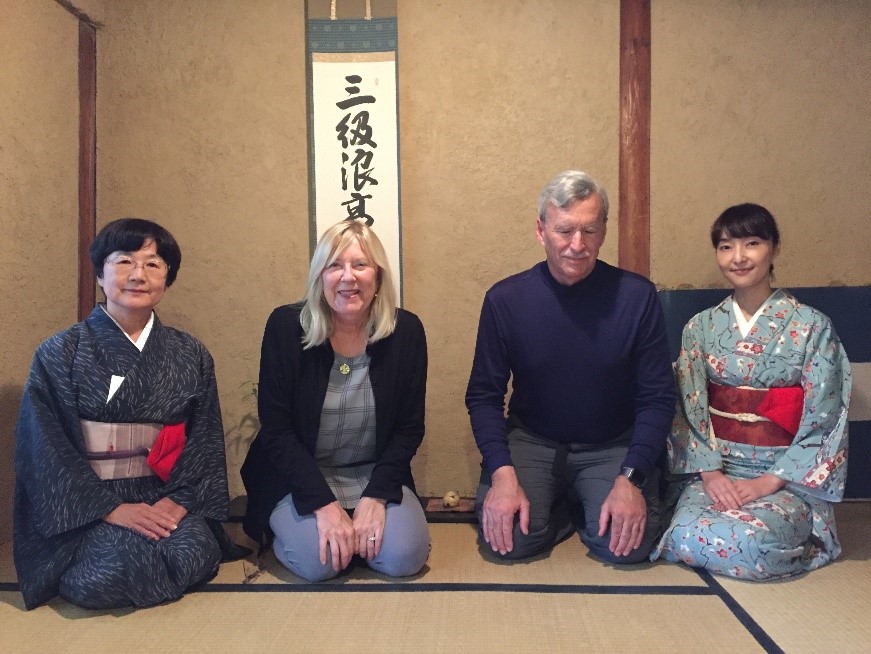 A thousand years ago Zen Buddhists sipped tea as way of staying awake during meditation. As we sipped our tea together this day, Hana explained how the ceremony had evolved as a way of bringing people together to honor the Japanese traditions of seeking calm, tranquility, and of sharing harmony and respect.  At the end of our time together, Hana turned unexpectedly to us. “You have honored us,” she said. She added a heartfelt, “Thank you.”

Looking back, I am grateful for the opportunity to travel, for being able to experience a world so different from mine, to see the perspective of Hana, her mother, and so many others.  But I came home with a greater appreciation, a most unexpected appreciation, of my own world:  the hummingbird who visits me daily, the black tea I sip from bubble glasses, the quiet writing time, and the stories I share with you and with friends.  It may not be an exotic world, but it is one that fills me with gratitude.

Large or small, what are you thankful for?